Skip to Main Content
Notice: Looks like you are using Internet Explorer. IE users will have difficulty with our site. We recommend using Chrome, Edge, Safari or FireFox.
library@saskhealthauthority.ca
306-766-4142
Locations & Hours

App of the Month

To keep you updated on the go, we highlight a free medical app each month!

About App of the Month

Librarian reviewers from Saskatchewan Health Authority and Alberta Health Services consider the audience and purpose of the apps, as well as highlighting additional features:

Our complete grading criteria is embedded in the review.

Note: Reviewers are not healthcare professionals and don't appraise the quality of any recommendations within the app. Reviews are not meant as endorsements. 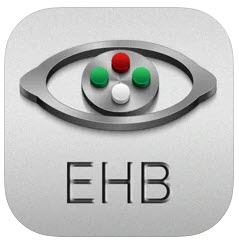 Provides a Forum for eye care professionals to crowdsource eye diagnosis & treatment information. There is also a staff directory listed within the app.

You can also email and share ‘pages’ within the app.

Ophthalmologists, optometrists, opticians, orthoptists as well as ophthalmology residents, or anyone involved in eye care

Information relating to the editorial committee is found within the app. As part of this, the Chief Editors are listed, along with Lead Editors for several specialty areas. There does not appear to be a grading system used within the app, and no information has been provided relating to content updates.

The fact that this app describes itself as a reference tool is not as strongly backed up by authorship or evidence provision throughout the app as it could be, unfortunately.

The provision of authorship information within this App is inconsistent and is reflected in the low scoring given. With regards to this, authorship was not provided for all EHB Manual entries. References were included for all three entries, but in some cases the evidence appeared to be dated; the lack of clarity around the update frequency of the content within the app is unfortunate. The links to external evidence were live and it was possible to access the articles within the app. However this feature only worked within the iPhone version of the app; it was not possible to open the article links within the Android version of the app, as part of the review. It appeared the currency of evidence being provided varied between entries. The video entry that was reviewed was lacking in the provision of evidence.

The first navigation menu is represented by 3 lines and can be found on the topic left hand side of the app –this menu brings you to settings, info about the app and the login area. The second navigation option is visual in nature and is represented by icons – these icons provide access to the EHB Manual and Testing information, for example. The third navigation menu can be found at the bottom of the screen – this provides access to News, the user directory and a Reference tool, for example. It is also possible to search the Reference tool using keywords.

Internet connection required for use: Yes

Browsable content: Yes; within the EHB Manual, Coding and Meds sections you can search by ‘subject’ i.e. topic/ coding type

Appears to be compatible with all Android devices. Requires Android OS 4.2 and up. https://play.google.com/store/apps/details?id=com.CloudNineDevelopement.EyeHandbook&hl=en_CA&gl=US
Last updated (as per Google Play listing): February 25, 2021

We'd love to hear from you!

Do you have an app suggestion or have questions/comments about the App of the Month feature? Let us know!